November 10, Marines across the globe will recognize and acknowledge 247 years of service to their country, the sacrifices made to defend democracy, and the Marine Corps’ enduring legacy as America’s premier fighting force.

The Marine Corps’ annual tradition celebrates the establishment of the organization on November 10, 1775, by the Second Continental Congress. Following their role in the American Revolution, the Marines were abolished following the Treaty of Paris in April 1783. Then, on July 11, 1798, Congress ordered the creation of the Marine Corps and directed that it be available for service under the Secretary of the Navy.

The birthday, also known as Marine Corps Day, was originally celebrated on July 11 from 1799 until 1921 when Major General Lejeune issued an order to formalize the tradition and establish the official day to honor the birthday of the Marine Corps. 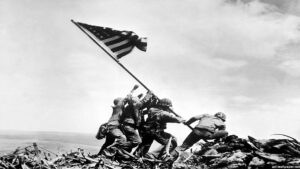 The Battle of Iwo Jima (19 February – 26 March 1945) was a major battle in which the United States Marine Corps (USMC) and United States Navy (USN) landed on and eventually captured the island of Iwo Jima from the Imperial Japanese Army (IJA) during World War II. The American invasion, designated Operation Detachment, had the purpose of capturing the island with its two airfields: South Field and Central Field.